Ten Nepalese climbers have made the first winter ascent of K2. And two of them wore PHD suits.

On 16 January 2021, ten men stood on top of a mountain. The mountain was K2. The season was winter. No one had done that before. Climbers had stood on top of Everest in winter, and Annapurna, and Dhaulagiri, but not K2. K2 was the only 8,000-metre peak never to have been the subject of a winter ascent. The ten men were all from Nepal. As they approached the summit, they sang the Nepalese national anthem, and walked shoulder to shoulder so that the triumph would belong to all and not to one. They announced the achievement by proclaiming that ‘the impossible is made possible!’ And two of them, as they made this historic ascent, were wearing PHD suits. The Omega Down Suit, and our brand new K Series Omega Down Suit, our warmest ever down suit which has been designed specifically for tackling 8,000-metre peaks in winter. 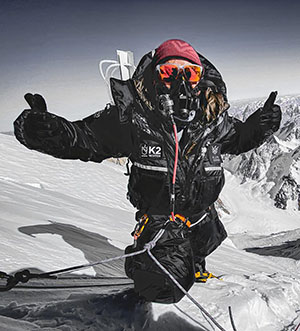 K2 is a difficult mountain. It’s been called the Savage Mountain. It’s been called the Mountain of Mountains. The Italian climber and academic Fosco Maraini spoke of the aptness of its stark alphanumerical name: there’s no softness in the name and no softness in the mountain. The ingredients of its implacability include the sheerness of the slopes, the exposure, the weather. Because the weather is a particular problem on K2. It really can get a bit chilly. And in winter, things get worse. Winds can reach hurricane speeds. A previous, unsuccessful attempt on the mountain led one climber to call K2 in winter ‘the worst place on Earth’.

Climbers have been trying to climb K2 in winter since 1987. Towards the end of 2020, about 60 climbers of various nationalities gathered to make the latest attempt. They formed four teams, one of which was led by Nirmal ‘Nims’ Purja, the former Gurkha and SBS cold weather warfare specialist who made headlines in 2019 when he climbed the fourteen 8,000-metre peaks in record time. Another was led by Mingma Gyalje Sherpa, known as Mingma G, who had climbed K2 twice before, though not, of course, in winter. The teams of Nims and Mingma G decided to join forces, along with Sona Sherpa from the Seven Summit Treks team.

The ascent was not a walk in the park. The notorious winter wind of K2 wiped out a camp, and all the equipment stored there, turning it into ‘a wreckage site’. Eight of the men got frostbite. Several of them teetered on the brink of giving up. Mingma G said that he couldn’t describe in words how tough one of the nights was. Nims, who climbed without the use of supplemental oxygen, described the ascent as a ‘beast of a challenge’. It was very hard to go on, but they went on, and two of them went on in PHD suits.

Pem Chhiri Sherpa, a member of Team Nimsdai, was wearing PHD’s Omega Down Suit, which has been used for scores of major expeditions in the world’s most difficult conditions. Mingma David Sherpa, who was Sherpa of the Year in 2019 and in the same year became the youngest person to climb all the 8,000-metre peaks, was wearing the K Series Omega Down Suit, which features improvements over the standard version in lightness and warmth. The K series version is 425g lighter than the standard, yet is also warmer, with a typical operating temperature of -60°C – exactly the kind of cold the K2 Ten had to contend with.

The K series improvements, implemented with attempts such as K2 Winter in mind, are permitted by the down, which is rare 1000 fillpower down that has unmatched warmth-for-weight performance, and by the fabric used for the outer shell, which is Dri-LX, our new, lightest ever 2-layer breathable waterproof rip-stop nylon fabric. The outer shell is taped at the seams and provides extremely robust waterproofing that prevents moisture getting into the down and compromising performance. The suit is designed to be a walking refuge. It’s a suit to wear when the weather really doesn’t want you there. It’s a suit designed for making it to the top of the world in winter.

So: a winter ascent of K2. For decades it didn’t happen. Now it has. PHD offers huge congratulations to all the climbers and is delighted to have played a part in their success.

“The suit is designed to be a walking refuge. It’s a suit to wear when the weather really doesn’t want you there. It’s a suit designed for making it to the top of the world in winter.”

€2,023.01
MORE INFO
Related stories from The Lowdown
Everest’s 1st Gigapixel Panorama?
When it comes to down suits, Tim Mosedale is something of a connoisseur. After dozens of Himalayan expeditions (including five summits of Everest, two of which in one season) and over 50 previously unclimbed peaks in Greenland, you start to get an idea of what your gear needs to be able to do!
A Suit Less Ordinary
Right from the beginning, off-the-peg solutions have never really been our style. So, when Anja Blacha asked us for something for her Himalayan trip which she couldn’t get anywhere else, we were all ears. Find out more.
Well suited to a life of adventure