Alex Pancoe climbed to the highest point in Antarctica and he did so wearing PHD. 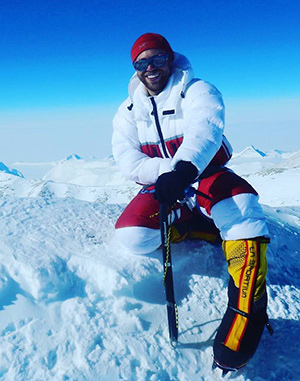 Although he’d spent a lot of time in the mountains skiing, it never occurred to Alex Pancoe to actually climb one until a trip to Africa inspired him to try Kilimanjaro. Thinking he’d bitten off more than he could chew, he trained as hard as he could and surprised himself by taking it in his stride…and so decided to climb more.

Kili is one of the Seven Summits – the high point of each continent – and pretty soon Alex decided to try to do them all.

Now, back in his late teens, Alex had started to have headaches. Bad headaches. They grew gradually worse until eventually, at his Mum’s bidding, he went for an MRI and discovered he had a brain tumour. Fortunately, it was benign and was successfully removed, but he knew how much worse it could have been and how a great many people were not so lucky. So, he decided his Seven Summits would not just be climbed for his own sense of achievement: he set out to raise $1,000,000 for the Paediatric Neurosurgery division at Chicago’s Lurie Children’s Hospital, where his tumour had been removed.

Now there was real pressure to keep going! So, next after Kili came Aconcagua, then Elbrus and, just before Christmas 2017, Vinson. He was wearing one of our Expedition Double Suits, so of course we were keen to find out how he got on. It wasn’t plain sailing, it seems, and he was glad of the suit: a sudden storm high on the mountain meant "We were stuck at high camp in some gnarly weather for 4 nights with temps approaching negative 50 with windchill! The whole suit came in handy then."

He’d left his iPad lower down the mountain so had nothing to keep him occupied, but the rather more pressing problem was the food: expecting to reach the summit, the team hadn’t brought enough for their unexpected stay. As supplies dwindled, they were very fortunate to be able to keep themselves going with a decades-old stash of salami and smoked salmon they’d happened across.

The weather lifted though, and their wait was rewarded with great conditions for the summit – so much so that he was fine in just the -10°C rated inner suit: something you couldn’t do with a single layer of insulation.

"…I just went with the first layer. Worked well. One thing I loved is the suits are designed in a way with pockets etc. that you can get creative with your systems. So I actually put a hot Nalgene in my front pocket and could use it to warm my hands if they got a bit chilled. Key word is versatility."

Versatility: that was always the idea! It’s good to hear how our developments are put to use out in the field though. We designed the suit for the big peaks of the Himalayas – where you get hot lower down and cold higher up – but of course, that ability to play with your layering is useful anywhere there’s a wide range of conditions, as Alex found when he became the first person to wear a Double Suit on the highest point of Antarctica.

Indonesia’s Carstensz Pyramid is next in his sights, then skiing to the North Pole in the spring, and…well, if you want to keep track of what Alex is up to next – or make a donation to his cause – you can check out his blog at peaksofmind.com, or follow @AlexanderPancoe on Twitter.

One thing I loved is the suits are designed in a way with pockets etc. that you can get creative with your systems. So I actually put a hot Nalgene in my front pocket and could use it to warm my hands if they got a bit chilled. Key word is versatility.

¥341,713.26
MORE INFO
Related stories from The Lowdown
A Suit Less Ordinary
Right from the beginning, off-the-peg solutions have never really been our style. So, when Anja Blacha asked us for something for her Himalayan trip which she couldn’t get anywhere else, we were all ears. Find out more.
Horia Colibășanu and Peter Hámor’s Hornbein Couloir Attempt
Given his impressive track record of oxygen-free ascents in the Himalayas, when Horia Colibăşanu contacted us about kit, we were intrigued as to what he was up to! He didn’t tell us exactly what he was intending, but this is what we found out…
The achievement of a lifetime…and then again the following day!
Having reached the summit of an 8000m peak, it’s not unheard of to want to do another. However, after climbing one, heading straight to the top of a second one the following day is rather more unusual!