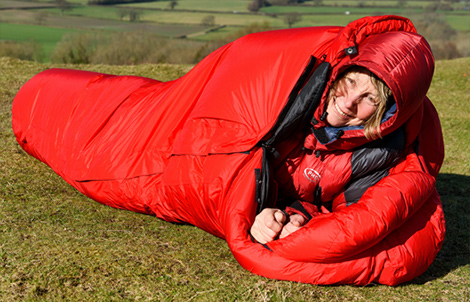 It’s true that 2020, which brought many things to a stop, stopped her briefly. But only briefly. Running from Brighton to Kathmandu, she was halted in Turkey by coronavirus restrictions. And so she ran from Land’s End to John O’Groats instead, becoming, at 74, the oldest person to achieve that feat unsupported. She was wearing a PHD Yukon down jacket on that run. And sleeping in a PHD Hispar 500K sleeping bag. PHD has long been a supporter of Rosie. Just as Rosie has long been a supporter of PHD. And now she’s resurrecting her attempt to get to Kathmandu, this time by running through Russia.

At first, she was not a runner. At first, she was a sailor. In the seventies, she sailed round Cape Horn with her family in a catamaran. In the eighties, she sailed solo across the Atlantic. Then she rode 3,000 miles through Chile on horseback. It was only in 1994, at the age of 47, that she took up running. She ran her first marathon the following year. Soon she was running across entire countries: Romania, Iceland, Cuba.

When her husband, Clive, died in 2002, she felt that something was asked of her – something ‘crazy and huge’. She decided to run around the world. She ran almost 20,000 miles, pulling a trailer behind her, sleeping at the side of the road. It was a way of paying tribute to her husband, and of raising awareness of the prostate cancer he’d been afflicted by. The run took her five years. She encountered wolves, bears, wild dogs. The wolves let her be, largely, though one joined her briefly in her tent. The wild dogs she won over with a loaf of bread. She encountered much kindness. And sometimes kindness’s opposite. But mostly kindness. Her husband had written a poem called ‘I Want to See the World’, and Rosie was out there, doing just that. There was something about the fact that she was running that made the seeing more meaningful. Running through a place made her feel she belonged to that place. It wasn’t like speeding through places in a car. The slowness of her progress meant that she could bathe in the details of a place, and the details made the places matter more. 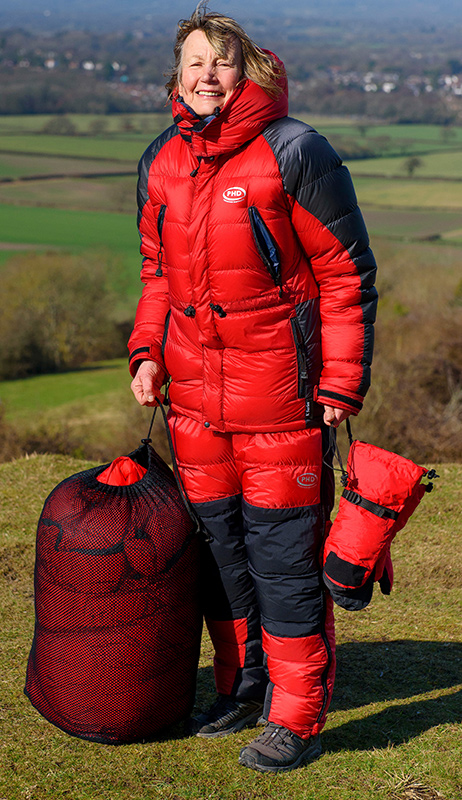 That run around the world, which lasted from 2003 to 2008, included a long run through Russia. She got hit by a bus in Russia. Though the bus driver turned out to be lovely. Now she’s running through Russia again, this time on the way to Kathmandu, in aid of a charity called PHASE Worldwide, which runs health and education programmes in rural Nepal. On that earlier run, she was wearing a PHD Xero jacket and Xero trousers. We’ve made advances since then – like Rosie, we haven’t been sitting still – and for her new run, we’ve made her some gear that is just as warm as that earlier gear but far lighter. The Denali jacket and trousers we’ve made are almost half the weight of those earlier items, an improvement permitted by the development of lighter and lighter fabrics and the use of 1000 fillpower down. It’s the rarest of downs – for the rarest of runners – and no other down provides so much warmth for so little weight.

We’ve also made her a Hispar 1000K sleeping bag, which we’ve shelled in our new waterproof Dri-LX fabric, which was our fabric of choice for the Omega K suit used in the first winter ascent of K2. Rosie’s trailer, which goes by the name of Ice Chick, suffers from condensation, and if she has wet gear in it, the sleeping bag will inevitably get wet. So we’ve made a completely waterproof shell for the bag using Dri-LX, which, as well as being waterproof, is also remarkably light. This option isn’t available on the website yet. But it will be soon.

Back in 2004, when Rosie was running through Siberia, a man with a knife tried to steal her phone. She was frightened. So was he. She told him not to be stupid, and knocked his knife aside. He shouted. He cried. He went away. In the wake of that, glad to be alive, glad that the world was still there before her, she thought of how lucky she was ‘to breathe, to be able to see and run and live’. She’s still seeing the world as a great treat, as a thing to go out into and revel in. Soon she’ll be out there in Russia again, and Kathmandu, and many other places, revelling some more. As ever, we wish her well.

Rosie still sees the world as a great treat, as a thing to go out into and revel in. Soon she’ll be out there in Russia again, and Kathmandu, and many other places, revelling some more.

¥110,121.67
MORE INFO
Related stories from The Lowdown
Age is just a number
When Roger Cook set out for Cho Oyu – the world's 6th highest mountain – a PHD Double Suit and Sleep System went with him: gear for every occasion without having to take different gear for every occasion. It’s all about the layers!
Run Robert, Run Robert, Run, Run, Run
What do you do when you’re stricken with ill health and bereavement? That’s right, you go and run the toughest races in the world.
A really very remarkable lady
Rosie Swale-Pope has just finished a run from Brighton to Berlin. But, as she once ran right around the world, that’s perhaps not all that surprising…