In places where it’s hard to run fast, Jasmin Paris runs fast, and during the Spine Race she ran very fast indeed.

In January 2019, a rather remarkable thing happened. The Spine Race made the national news. Now, the Spine is a very challenging event – covering the 268 miles of the Pennine Way National Trail from Derbyshire to the Scottish Borders, in winter – and the physical and mental effort required to complete it is extremely impressive. But it happens every year, and, well, fell running tends not to make the news. 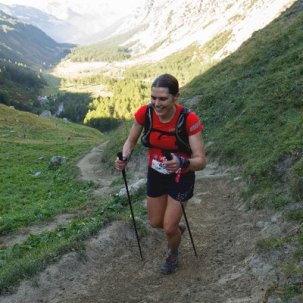 Jasmin, running, in the middle of nowhere, with a big smile. Pretty much what you can expect, really.

This year, however, it did. The course record was beaten – not with a few seconds or minutes being shaved off, but by 12 hours. That was made possible in part by simply not sleeping for any more than three hours during the whole event, which apparently led to some pretty interesting hallucinations for the victor. That’s all very newsworthy of course, but what really caught the popular imagination was that while historically, the very fastest athlete over any given course tends to be a man, in this case the winner – who stopped periodically to express breastmilk – was very definitely a woman.

Moreover, she’s not a professional athlete, she’s a vet. In fact, she ran the Spine during a week off from writing up her PhD, which is due in in March. She also wrote to PHD (Ha! See what we did there?) to discuss how suitable her limited edition Minix bag would be for the Spine. We’re really very pleased that – having done the race – she told us “I do love your sleeping bags, perfect and toasty for someone who likes to be warm at night and travel fast by day!”

Much of this particular story has – as mentioned – been covered in the press, but this sort of thing really isn’t out of character for Jasmin. For example, she’s the current British Fell Running Champion, and holds the record for the Ramsay Round: a 58 mile route over 24 mountain summits (including Ben Nevis). Later this year, she and her husband Konrad will be competing in the PTL (300km in the Alps).

So, if you find her as inspiring as we do, you can find out what she’s up to on her blog, “Talking of fells,…”

I do love your sleeping bags, perfect and toasty for someone who likes to be warm at night and travel fast by day!

Share this post
Related stories from The Lowdown
Fire & Ice: Back to the Icelandic Wilderness
The Fire & Ice is one of the toughest races in the world (even the five-times winner of the Marathon des Sables reckons it’s tough). It takes in 250km of volcanic ash, glacial river crossings, barren rock, grassy meadows, and everything else the Icelandic terrain can possibly throw at you.
A Very Human Race