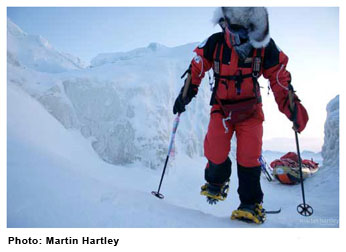 We were delighted to supply cold weather gear to Rosie Stancer who attempted to become the first woman in the world to walk solo to the North Pole. The expedition called for her to haul her sledge over 415 nautical miles of frozen Arctic Ocean for 60 days, coping with the psychological stresses of being alone in a polar desert and dedicating all her resources to survival in the extreme Arctic environment. Her survival kit included our Xero down boots, Minimus Down Vest, and Xero down jacket.

On the actual expedition Rosie spent 84 extremely grueling days on the ice, covering 326 miles. She was evacuated just short of the Pole having battled against what has been described by many as the worst conditions in recent history. Rosie did reach further North than any other woman solo. During the expedition she experienced temperatures from as low as -55C to dangerously warm levels of -2C, repeated storms and shifting ice. Rosie found herself encountering miles of never ending ice rubble and more dangerously, larger and more frequent open water leads.