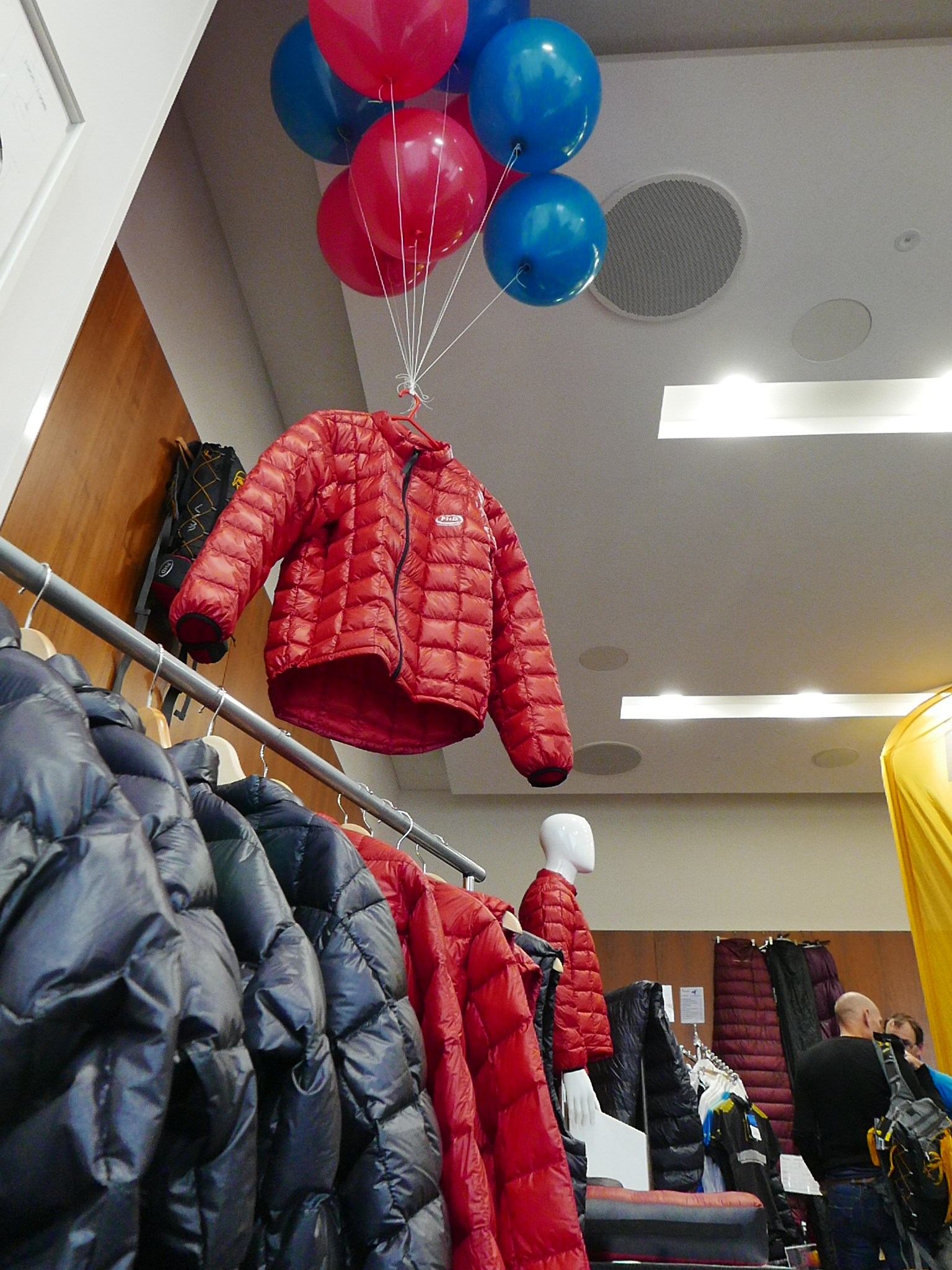 Earlier this month, Pete, Emma and Jacob from HQ loaded up Pete’s car with kit, and headed south. The mission: go meet the folks at the MdS Expo, and spread the PHD word. This is the annual event where those who’ve signed up to run the Marathon des Sables find out just what on earth they’ve let themselves in for.

On the way, Pete mentioned that as well as jackets and sleeping bags, he’d brought a couple of canisters of helium and a load of balloons. Frankly, this isn’t what Jacob and Emma had really expected.

The following morning, not-that-bright but very early, in spite of Pete’s inherent distrust of the satnav, we arrived at the Institute of Engineering & Technology to set up. While Pete and Emma sorted out the majority of our display, Jacob set about discovering how many helium balloons you need to support the weight of a Waferlite Jacket.

The answer, should you be interested, is an impressively minimal seven. And at least a couple of those were because of the weight of the hanger.

The day passed in series of hectic bursts of activity as big groups flooded out of lectures together and came to see what we were up to, and why we had a jacket bobbing around in the air above our table.

Well, as we make the lightest down jacket in the world, we thought we could probably get away with a little light-hearted showing off…

That’s the great thing about the event (for us, at least): people who normally only see our website have a chance to come and see us, and we have a chance to really connect with them and discuss what they need. A lot of folks had done a lot of running, and a lot of them were no strangers to a night in a sleeping bag, but unless they’d actually done the MdS itself, they obviously couldn’t be sure how the MdS would treat them. So there were a few concerns to allay!

The big message that circulates at the Expo is that the only correct approach is the one that works for you, so we explained the ins and outs of the Desert Race and Waferlite kit – or anything else that seemed like it might fit the bill – and allowed people to work out which would be the best way to go for them. And that seemed to be the key to some rather more relieved, confident faces!

Giving out information is only half the process of connecting with people though: designing and making everything ourselves means that getting feedback and opinion plays an important role in what we do. For example: MdS veterans told us that sleeping bags are often strapped to the outside of rucksacks…so we made the Desert Race Stuff Sac to make that easier. Then they said the sac was a bit chunkier than it needed to be, so we remade it in lighter fabric.

Oh, and thanks to the traffic gods who smiled on us and allowed us to get back to North Yorkshire the right side of midnight. A distinct improvement on last year…