Many, many moons ago, a certain Mr. Don Whillans approached a certain Mr. Peter Hutchinson, and asked him if he could make something to keep him warm on his high altitude exploits. Peter duly did, and the down suit was born. Peter – the PH in PHD – kept making them, and now of course, they’re de rigeur for anyone heading way up high. 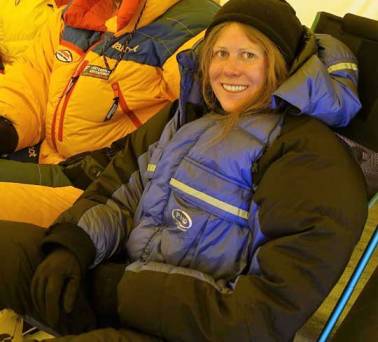 Rather more recently, we received a call from a young lady who was heading for Everest and needed a down suit. Well, normally of course, that’s fine. The problem was that Anja – like Don – is about 5’5” (which puts her in a size Small) but – unlike Don – she’s rather slimmer than the fit of an Extra Small, and that’s the smallest size we do. Nevertheless, we were able to make her a Xero Suit which was effectively an S/XXS hybrid, and that’s what accompanied her to the summit of Everest.

Another of Peter’s innovations has been working out just how much warmth you get from layering different sleeping bags, or sleeping bags and clothing: the Sleep Systems concept. This too proved very useful in Anja’s case: when she asked us if we could make an Overbag to boost the warmth of her Hispar 800K for the Himalayan trip, we checked the figures and actually, her Xero Suit would be able to boost it by pretty much the same amount. And as she’d obviously have that with her anyway, she could save weight. 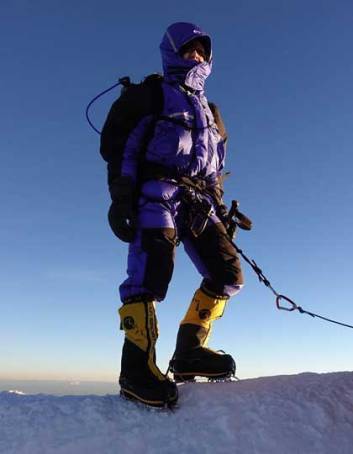 So that’s what she did. At Base Camp she had the Hispar 800K, then at ABC and Camp 1 she teamed it with an Ultra Quilt “…which was really soft and warm and still lighter than everybody else’s single sleeping bag! I was warm enough just wearing tights and a long-sleeve T-Shirt.” As she got higher, she was able to combine the Xero Suit with the Hispar “which again was very warm and comfy, and I still had enough room to move.”

So, what’s next? Well, inevitably, the tinkering with new ideas continues unabated. Earlier this year we released our ingenious Expedition Double Down Suit: if you get too hot, now you can easily shed a layer. The really clever part is that you can shed a layer even if you’re roped up. Now, stir that into the Sleep Systems mix and you’ve got an exceptionally lightweight, versatile setup to take you from the foothills to the summit and back down again.

You don’t have to be going to the upper reaches of the Himalayas to take advantage though. We all approach our adventures differently, so even if your trip doesn’t seem that out of the ordinary, that doesn’t mean your kit shouldn’t be…

We were able to make her a Xero Suit which was effectively an S/XXS hybrid, and that’s what accompanied her to the summit of Everest.

$522.09
MORE INFO
Related stories from The Lowdown
You never know who you might find wandering around Stalybridge…
Not best known for idling around and dodging a challenge, it’s not too surprising that Ben Fogle & Victoria Pendleton fancied a crack at Everest. Before that though, they had to make the perilous journey north to see us at PHD.
Check, Check and Check Again
How do we know our gear works in the places we say it will? The answer is as simple as you might think. We send it there.
Well suited to a life of adventure