They came to PHD. Then they went to Everest. Then we wrote about it.

As documented in CNN’s “The Challenge: Everest”, in the spring of 2018, chap-with-fingers-in-many-adventurous-pies Ben Fogle and champion-track-cyclist-turned-jockey Victoria Pendleton set out for Everest. They met by chance a few years ago, became friends, and realised they both had lofty ambitions: the very loftiest, in fact. That maybe shouldn’t be all that surprising: it took ten hyphens just to describe who they are. More to the point, when you think of Ben or Victoria, you don’t tend to think “bone idle, never achieves anything…” 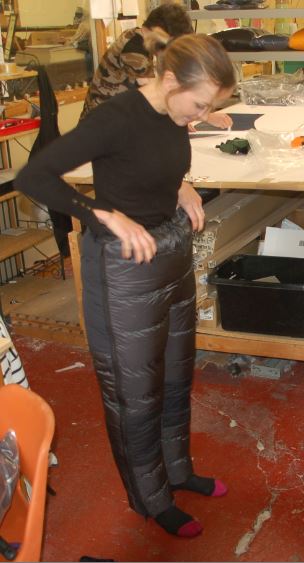 OK, maybe it does look a bit big, but that is two pairs of trousers…

As well as the challenge to themselves, they also set out to raise money for the Red Cross, and to highlight environmental issues surrounding the huge number of annual visitors to what was once a wilderness, which meant they also wanted their trip to be as low-impact as possible.

Small scale, UK manufacturing seemed to fit that bill for them, so they came to see us before they went, to meet the folks, have a chat about kit (and see what we could do to fit Vic’s slender frame). Ben was concerned about getting too hot, and Vic about getting too cold, which may seem like opposite concerns, but really they’re different ways of looking at the same problem: how do you cater for all conditions? Layering is the obvious answer, of course, but is rather at odds with the standard-issue Everest setup of an all-in-one suit under a climbing harness.

So, as well as their bags – Vic took a Hispar 1200K (the warmest bag on our list) and Ben took a Diamir 1200K – and a selection of other bits, they chose to take our Expedition Double Suits. You may know the idea, but it’s pretty niche so it’s fair enough if you don’t: because of the too hot/too cold problem, we make a lighter suit which you sort of ‘live in’ below about 7000m, then a two-piece outer which you put on and take off as necessary. Openings in the outer let your ropework poke through so you can just keep your harness on.

No, I said pay attention, not stand to…oh, never mind…

Ben’s tendency to overheat meant he very nicely demonstrated our little invention to the world’s press, which was really rather good of him. In the summit photos, he’s clearly wearing the inner suit and the jacket. He told us “In short the suit was amazing and the envy of every other climber.”

It wasn’t plain sailing however. A series of exploding oxygen regulators above 8000m meant the expedition very nearly ended in failure – possibly even tragedy. The regs had a history of being totally reliable, so this must have seemed quite spectacularly unlucky (not to mention thoroughly terrifying). Numbers thinned as O2 kit was handed over by Sherpas and guides to allow progress to continue, and in the end a rather smaller party than originally intended made it to the summit.

It was smaller still, in fact, because before all this, Vic had had to pull out. Despite her truly world-class levels of fitness, her body struggled to adjust to the altitude, and her oxygen saturation dropped as low as 28%. The oxygen starvation has since triggered symptoms of depression upon returning home which, although not uncommon after suffering hypoxia, must seem really very cruel after such a disappointment.

So our commiserations and best wishes to Vic, of course, for all that happened, but kudos for the tremendous effort in spite of the body’s best attempts to rebel! And congratulations to Ben, on reaching the peak he’d dreamed of for so many years.

“The suit was amazing and the envy of every other climber.”

$2,517.72
MORE INFO
Related stories from The Lowdown
The achievement of a lifetime…and then again the following day!
Having reached the summit of an 8000m peak, it’s not unheard of to want to do another. However, after climbing one, heading straight to the top of a second one the following day is rather more unusual!
Well suited to a life of adventure