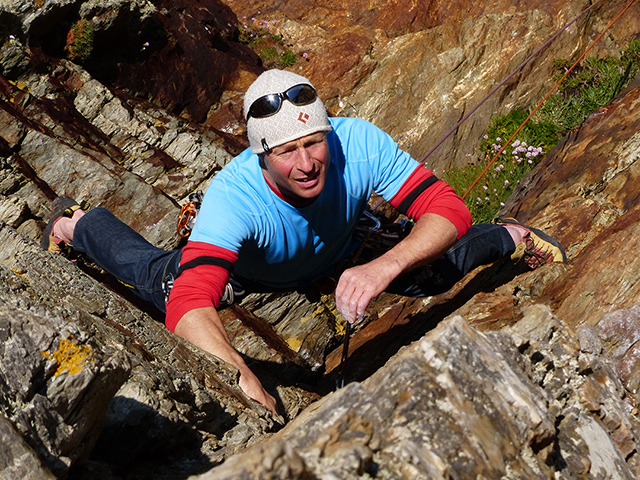 Jerry Gore was hit by lightning once. He was climbing in the Bugaboos, in Canada, and the strike made his eyeballs turn red and his hair go all dramatic. Burns occurred. Also, understandably, crying and praying. But he made it down the mountain, and the incident didn’t stop him climbing. Then, in 2001, another kind of lightning bolt struck when Jerry was diagnosed with Type 1 diabetes and was told by doctors that he couldn’t climb again. That didn’t stop him either. Soon, he’ll attempt to become the first Briton with diabetes to climb K2. In fact, only one person with diabetes has ever climbed K2 before. Jerry’s equipment will include extra-long syringe needles so that he can inject himself with insulin through his clothing. Some of this clothing will be PHD clothing. We’ve supplied him with the -50°C version of our Expedition Double Suit, which is designed for no-oxygen ascents of 8,000-metre peaks. We’ve also supplied him with our Hispar 500K sleeping bag.

K2, it hardly needs saying, is a very big ask even for climbers who don’t have diabetes. It’s very high and very hard. The wind can be very bad. The cold can be very bad. There are very few flat bits and very many steep bits. It’s very hard to go up it and very hard to come down it. It isn’t just any old mountain. When Francis Younghusband saw it for the first time in 1887, from twelve miles away, he spoke of a ’peak of appalling height’. When Jules Jacot-Guillarmod saw it for the first time in 1902, he was rendered speechless and felt as though paralyzed. Jacot-Guillarmod was taking part in the first recorded attempt on the mountain, alongside the occultist Aleister Crowley. The attempt featured chess, champagne and Crowley waving a revolver about whilst feverish from malaria. It was not successful. The first successful attempt came half a century later, in 1954. The first winter ascent was in 2021 by a group of ten Nepalese climbers, two of whom were wearing PHD suits. 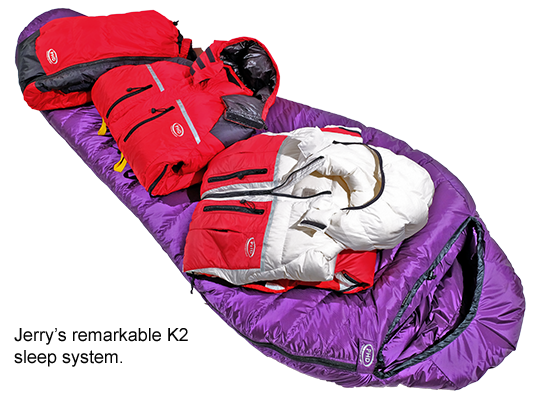 Jerry is 60 now and has been climbing for over 40 years. He climbed Mont Blanc when he was 17, and the 7,000-metre Manaslu North when he was 22. He holds the UK record for the fastest ascent of the North Face of the Eiger. He’ll be climbing with Rick Allen, who made headlines for his summiting of Nanga Parbat via the 8-mile long Mazeno Ridge. With the K2 climb, Jerry hopes to raise £50,000 for the charity Action4Diabetes, which he co-founded in 2015 and which provides healthcare and support to disadvantaged young people with Type 1 diabetes in South East Asia.

The suit Jerry will be wearing on K2, the -50°C Expedition Double Suit, is a suit designed to be versatile. We introduced the double suit in 2017 as a way of dealing with the large variations in temperature that occur during high-altitude climbs. It consists of a one-piece inner suit and a removable two-piece outer, and the adjustability of the suit makes it easier to avoid being too hot on the lower slopes and too cold on the higher. And though the suit may be a double suit, it isn’t double the weight. In fact, it’s lighter than a single.

Jerry’s sleeping bag is light too. On the face of it, the Hispar 500K is an unlikely choice for K2, as it’s rated at -15°C, more suitable for a Scottish winter. Jerry will be using the bag as part of a Sleep System – he’ll be boosting its performance by wearing his suit inside it. We’ve made him a wide version of the bag so it more easily accommodates the suit and allows it to fully loft. The suit’s inner layer will boost the bag’s performance to -27°C, while the addition of the outer layer will boost performance to -44°C. It’s a way for Jerry to go very high very light.

When he was diagnosed with Type 1 diabetes, doctors told Jerry he couldn’t climb again. Soon, he’ll attempt to become the first Briton with diabetes to climb K2.

$1,292.93
MORE INFO
Related stories from The Lowdown
Check, Check and Check Again
How do we know our gear works in the places we say it will? The answer is as simple as you might think. We send it there.
The Top of the World in Winter
Ten Nepalese climbers have made the first winter ascent of K2. And two of them wore PHD suits.
The Million Dollar Mountaineer
Alex Pancoe aims to raise $1m for a children's hospital in a PHD Double Down Suit.