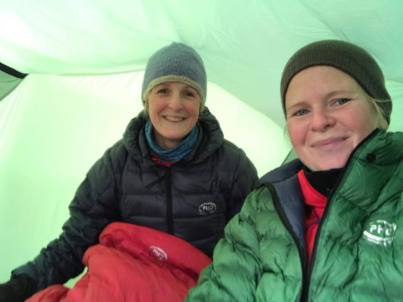 You thought it was cold, wet and horrible, didn’t you?
But see those smiles? Those are real smiles.

Way way back in the mists of, well, ages ago, a mountaineer and orienteer by the name of Gerry Charnley took out an ad in an outdoor magazine, looking for people to compete in a two day event which would combine those skills: navigating as quickly as possible between checkpoints, and generally getting on with being out in the hills.

Several dozen folks duly showed up to Muker in the Pennines, and set off on the first incarnation of what was to become the OMM: the Original Mountain Marathon.

Moving around all over Britain (it doesn’t really work as a route-finding event if it’s always in the same place) the OMM has been held every year since. This year – fifty years on from that inaugural race – it was in the Black Mountains of Wales. It might have been more convenient had it been back in North Yorkshire where it all started though, as one of the many competitors lining up for OMM 2018 was (not for the first time) our very own Emma Harris.

We’ll pause here to say that yes, of course Emma and her race partner Heidi were using PHD gear, and of course it worked! Check out our race calendar if you’d like any info on what sort of gear to take, or get in touch: we’ve got a pretty reasonable idea of what will work!

Meanwhile, back to the OMM…

Originally it was an elite event, the preserve of wiry hardcore fell runners (and they are still in evidence, to be fair), but with each passing year, its scope has widened considerably. The sport of adventure racing – which was quite possibly inspired by the OMM – has mushroomed, and that high profile has in turn helped to popularise the OMM. Now there’s a variety of courses for competitors of differing abilities, and 300 of this year’s competitors were first-time entrants.

Admittedly, conditions can get rough – this year the beautiful weather turned to sleet and snow, and the temperatures dropped to -11°C – but with the right gear, the right skills and the right attitude, that’s not a problem. It certainly doesn’t require you to be an elite athlete, and Emma would be the first to admit that she isn’t a runner. Between family life, managing the office here at PHD and working on her farm, she really hasn’t got the time to be!

The point we’re making is that an event like the OMM needn’t seem out of reach. It’s still a challenge – and the elite can still compete at their elite level – but the nature of challenges and achievements is that ultimately, they’re personal. So it doesn’t matter how elite anyone else might be, it’s about what you can do.

Emma and her race partner Heidi were using PHD gear, and of course it worked!

Share this post
Related stories from The Lowdown
Fire & Ice: Back to the Icelandic Wilderness
The Fire & Ice is one of the toughest races in the world (even the five-times winner of the Marathon des Sables reckons it’s tough). It takes in 250km of volcanic ash, glacial river crossings, barren rock, grassy meadows, and everything else the Icelandic terrain can possibly throw at you.
So light it’s just not fair!
160km – 100 miles, if you prefer – in under a week is quite an undertaking. Even more so when you do it at altitude. Even more so when you consider that the height gain is upwards of 28,000m. So, it’s not really surprising that competitors in the Everest Trail Race like to keep the weight in their bags to a minimum!
Put your back into it!
The Spine Race, tracking north up through the Pennines – ‘the backbone of England’ covers 268 miles and lasts a week. Well, it used to. It’s still 268 miles, but it just got a lot quicker…