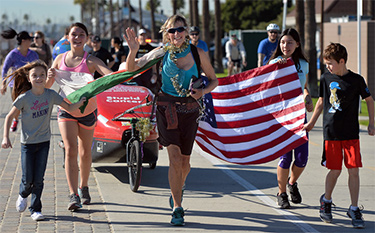 Joy and hope. It’s all too easy to concentrate on the negative, but if you look for it, there’s always joy and hope…and you don’t get much more joyful and hopeful than the remarkable exploits of Rosie Swale-Pope!

So, what’s she been up to now? Oh, not much. Back, in late 2014 she set out to run from New York to San Francisco, that’s all. And just in case that wasn’t enough, she decided to throw in hundreds of extra miles by going via El Paso in Texas.

She was accompanied by her “Ice Chick” - a small trailer, rather like a bivi-tent on wheels - which she trundled along behind her by day and lived in by the side of the road at night.

To be honest, this isn’t entirely out of character for Rosie: she’s been an adventurer for decades and then, in 2002, when she lost her husband Clive to cancer, she decided to run around the world to raise money for charity. The following year she set off and, for the next five years, that’s precisely what she did. 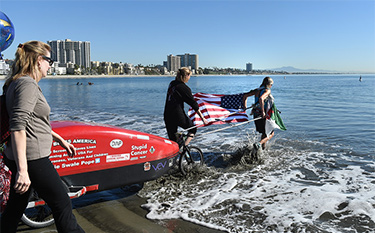 This time, the trip was more about raising awareness than raising money: when her husband first showed signs of illness, the cancer was already unstoppable, so now she wants people to understand the importance of screening, to know how easy it is to be caught unawares.

Well, running for 3,371 miles across America towing a red cart with “Stupid Cancer” written across it draws quite a bit of attention!

That naturally leads to conversation and to publicity, which in turn leads to the message being spread.

The other thing she was raising was spirits – not least her own. As Rosie puts it, she’s “fighting darkness with light”. The inspiration for the run may have been born of terrible personal tragedy but, stopping along the way to make friends, spread her message and to just enjoy the country, she experienced great joy and happiness. And from there grew more joy and more happiness. 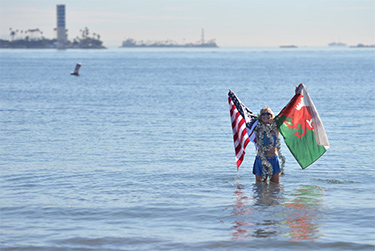 For example, when a couple of hikers met her heading up Mount Whitney alone one cold afternoon, they became concerned for her safety. They gave her the remains of their food and returned the following day to find Ice Chick at the foot of the mountain, and so left more supplies and their contact details. Safely back down, Rosie called them…and they were so struck by her and her story that when the final leg of her journey took her into Long Beach, they had organised a parade for her arrival.

Two years after she left the Queen Mary 2 in New York, a police motorcade escorted her to the Queen Mary, where she was received on a red carpet by the ship’s commodore and the British Deputy Consul-General.

She tells us that during her round-the-world run, as temperatures plummeted down past -60°C, PHD equipment literally saved her life. So this time, naturally, we had to kit her out again! 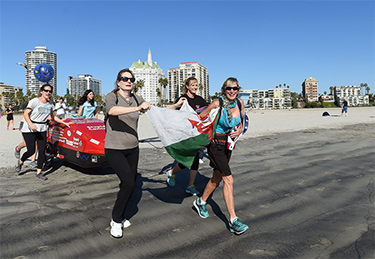 Moving entirely under her own steam, she needed her gear to be small, to be light, and to be completely dependable. To that end, she slept in a Hispar 500K, and a Drishell Minim 400 when it wasn’t so chilly.

When the heavens opened she wore Alpamayo waterproofs – top and bottom – and although towing a cart down an icy road wasn’t really what we had in mind when designing the Minimus Jacket, it seemed to work pretty well for Rosie! To cap it all off (pardon the pun), she had her Minimus Hat.

Taking delight in everything she does, Rosie's joy and hope appear to be infectious, and no bad thing.

Whether you choose to concentrate on her fundraising, her campaign of health awareness, the sheer magnitude of her endeavours or simply the delight she takes in it all, what she has done – and continues to do – is quite incredible, and we’re very proud and pleased to have been able to help.

Here's a great video from The Weather Channel filmed mid way through her 'little run across America':

We've long been a supporter of Rosie's. On her incredible solo run around the world, we supplied her with a full compliment of PHD gear: and she needed it. Encountering temperatures of less than -60ºC, Rosie was protected by our Xero and Minimus down jackets, Xero mitts and boots, a special Minim down sleeping bag, and more besides.

In Rosie's own words: "I could NOT have succeeded in my round the world run without your brilliant equipment. It has literally saved my life at -62ºC."