You might think that high altitude mountaineering is a pursuit best left to the young and sprightly. It's so physically punishing, after all, that that would seem to make sense. But on the other hand, with age comes experience, and with that comes the knowledge that steady persistence will get you there. And Roger Cook's summiting of Cho Oyu, aged 68, appears to bear that out. 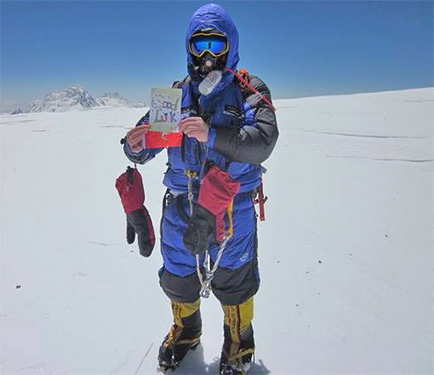 It was a trip not without its difficulties. For example, at one point, a 20m fall left Roger clinging to rocks and in need of rescue, as his rucksack tumbled the kilometre drop to the glacier below…his rucksack containing his pee bottle, which he wasn’t especially happy about. Having then made it to Camp 1, he was further unimpressed to discover that he’d left his Kindle at Advanced Based Camp. A rather different class of problem, granted, but there can be a lot of waiting around for conditions to be right and, stuck in a tent at 6500m, having something to occupy you feels rather more pressing than it does when you’re just waiting for a train!

Conditions weren’t always favourable, with guides disappearing into crevasses and being hauled out as they moved ahead to fix lines and stash kit at higher camps. Freezing temperatures and high winds combined to create showers of frozen moisture inside the tents, echoing the blizzards outside. And one of the driest seasons on record meant precious little snow to anchor the rocks of the Yellow Band in place, giving rise to the constant risk of being hit by stones dislodged by climbers above.

Things were made considerably worse when Sherpa Chirring Bhota was struck down with high altitude cerebral oedema and needed to be evacuated. HACE really does not discriminate: Chirring Bhota is a veteran of numerous 8000m summits, who was depended upon by the expedition for his strength, skill and experience. For this very small team, his collapse represented an extremely significant loss.

But they persisted. And Roger’s slow but relentless plodding was remarked upon by the guides – that relentlessness being really very useful – and ultimately rewarded. Somehow he managed to kick down a gear and accelerate away, heading for the summit in a manner described by the leader as being “like a tortoise on steroids”.

When he made it to the peak, he did so as the oldest British man to summit not only Cho Oyu, but indeed any of the 8000m mountains.

During his preparation for the trip, we’d discussed the various approaches he could take with regards to his equipment. On his return, he was kind enough to tell us how it performed:

“With thanks to all at PHD. The Double Suit was excellent along with the PHD sleeping bags, Hispar 500 and Overbag providing flexibility for Advance Base Camp, Camp 1 and Camp 2.  The most used item was the Minimus Down Trousers that came into their own in the evenings at ABC where we spent time waiting for a favourable weather window.

On return to Kathmandu I discovered that at 68 I am the oldest UK male to have climbed any of the fourteen 8,000m peaks.

Once again, thank you for your help in choosing the right kit for the task.”

Huge and well deserved congratulations to Roger on his achievement, and many thanks for the feedback.

With thanks to all at PHD. The Double Suit was excellent along with the PHD sleeping bags, Hispar 500 and Overbag.

£355.00
MORE INFO
Related stories from The Lowdown
A Suit Less Ordinary
Right from the beginning, off-the-peg solutions have never really been our style. So, when Anja Blacha asked us for something for her Himalayan trip which she couldn’t get anywhere else, we were all ears. Find out more.
Alex Pancoe on Vinson
Although he’d spent a lot of time in the mountains skiing, it never occurred to Alex Pancoe to actually climb one until a trip to Africa inspired him to try Kilimanjaro. Thinking he’d bitten off more than he could chew, he trained as hard as he could and surprised himself by taking it in his stride…and so decided to climb more.
A really very remarkable lady
Rosie Swale-Pope has just finished a run from Brighton to Berlin. But, as she once ran right around the world, that’s perhaps not all that surprising…